Chris Forte
Nov 24, 2021
Thanksgiving "Italian American Style"
In Welcome to the Forum
Thanksgiving is coming up soon this year for us Americans and being a quintessential and distinctive American holiday, I’m sure many of us want to keep it as traditional as possible. That is with the traditional foods: turkey and stuffing, yams, mashed potatoes, corn (on or off the cob), and desserts like Pumpkin Pie. But as a free and diverse nation we can of course mix it up a bit and add bits of our ancestral culture to make our celebration our own and unique. In my own family we would have a zucchini casserole, and along with the Turkey, as a main dish some sort of pasta, usually Manicotti or Stuffed Shells. Lasagna and meatballs was and still remains the main course on Christmas for us. For dessert, a long with American favorites like Pumpkin and Apple pie, we’d have cannoli, biscotti, and some sort of Italian cookies. Before I go on let me explain briefly the story of Thanksgiving, for those who don’t know. Traditionally we were taught that it was a meal shared between the Pilgrims and Native Americans in the new Plymouth colony back in the 1600s to celebrate and thank the Natives for helping the Pilgrims learn to survive in their new environment. The “Pilgrims” were British Puritans looking for a new land to freely practice their religion and eventually landed in what is now Massachusetts. This meal is said to have occurred around the first Harvest time in November. It was made an official holiday by President Abraham Lincoln on October 3rd, 1863 in honor of the ending of the Civil War. Traditionally, Americans would use it as an opportunity to gather with family to share a large meal, celebrate and give thanks for…well….anything. It’s just a time to remind us to appreciate what we have in life, especially our families. In addition to food, adding a few Italian dishes to the American table, for entertainment in the background my family, our gatherings usually organized by older members, would have old Italian American favorites singing. Names like Dean Martin, Frank Sinatra, and so on. Yet another distinctive Italian American trait of our very American Thanksgiving and other family gatherings is “The Italian Goodbye.” At the end, when each of our usual 50 or 60 guests go to leave, each one has to say goodbye to each individual personally and inevitably get into a long conversation with each one. Consequently it takes at least an hour for each guest to go from saying the first “Goodbye” to actually getting out the door. To say nothing of getting into their cars and finally driving away! But I digress…for ideas on how to have a Thanksgiving “Italian American style” click on this Google search link and feel free to comment here on what, if anything, your family does to make Thanksgiving Italian. Have a Happy Thanksgiving! Auguri! 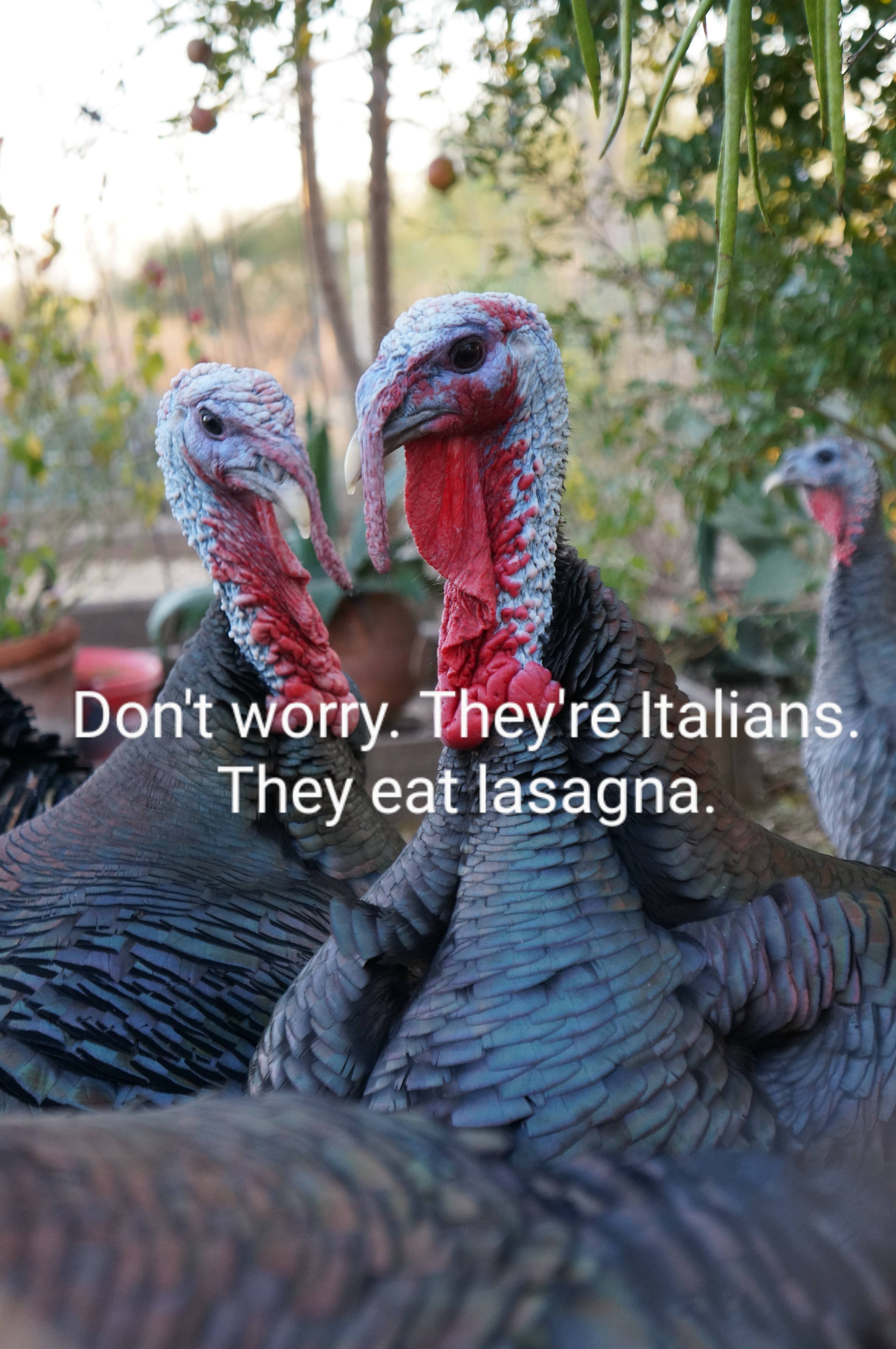 0
0
5
Chris Forte
Nov 24, 2021
My Italian Family
In Welcome to the Forum
My Italian Family!!: I originally posted this as a private message to a friend on Facebook, but just thought it was too cute (and funny?) not to share here!: The following is about my paternal grandmother's "Family & Friends Day" event at her house. This was in Yorba Linda, a middle to upper-class suburb in northern Orange County, California. It was just "a party to celebrate life," as my grandmother put it, as most of the people there only got together for weddings and funerals, and there had been way too many funerals lately. Lots of her friends, even ones from back East (NY) were there, so I didn't know everybody. but most were extended family and so it was like a family reunion! I'm half Italian, and this was that half! So let the clichés begin!: 1.) My grandmother on the phone talking about the caterer: "We can't run out of food. We're Italians, we don't do that." (Not only did we have food left over, but enough to fill the house! And it's a big house!) 2.) My grandmother: "I hope this goes off without a hitch." My aunt: "If there's an issue, I'm sure no one will notice." My grandmother: "The Italians would notice." (Even at a party of mainly White Caucasians with little diversity, there is still a distinction between "The Italians" as my grandmother called us....and everyone else.) 3.) "Some people brought stuff even though I told them not to," said my grandmother. "When I asked why, they said 'we're Italians, we don't show up to a party empty-handed.'" (Many party-goers, especially family, brought food, wine, cards, gifts and flowers.) 4.) "Heck, we're Italians, we hug!" said a distant cousin of mine who I last saw about a hundred years ago as he gave me a bear hug. 5.) Duck! Almost everyone talked with their hands, navigating the gathering without getting hit by a talking relative was like running a gauntlet. 6.) Cover your ears! IT WAS LOUD! Being Italian, my family spoke very loudly! No, we're not fighting! That's just how we talk! And that was before they were drunk! 7.) Everyone yelling at my Grandma to sit down! The consummate host, she always had to be up serving people or doing something! 8.) Eat, eat! Until you explode! Or it seems! No matter how many times I tell my Grandmother I'm full she insists I eat more! This after I had two full plates already! 9.) "Damn these Italian goodbyes!" exclaimed one of my cousins. "It takes us an hour to leave!" (For those that don't know, an "Italian Goodbye" is when, at any size party, even one with hundreds of people, you say goodbye to each individually and inevitably get stuck into a long conversation with each one. In fact, another cousin was still at the party very literally an hour after saying his first "goodbye." "Forget the Italian goodbye!" yelled a frustrated Great Aunt (or was she some sort of cousin? Well.....we're related somehow lol) "This is how you say 'goodbye'!" She waved at the entire crowd from a distance and hollered at the top of her lungs, "Goodbye, everybody!" Then dashed for the door. But...she...didn't...make it! Also: 10.) Dean Martin, Frank Sinatra and like music in the background. 11.) People talking about preferring pasta over the taquitos that were served at the party. Oh, there's more! There's enough jokes, stereotypes, and clichés to fit a novel, and ones that aren't so much unique to Italians, as to just my family. lol We're just crazy like that! Ask anyone!....It was a great time! I can't wait until the next! I forgot to mention: Many people, especially my grandmother, great-aunts and great-uncle, and some second cousins who came from NY at an older age, still had East Coast/NY/Brooklyn accents, they could have stepped straight off the set of The Sopranos! Heck, my grandmother sounds exactly like Edith Bunker of "All in the Family." lol Below is a pic of just a few of my family that were there. There were almost over a hundred guests, but the photo cut them out, there wasn't enough room in the frame for them all. And of course...being Italian...here we are eating! 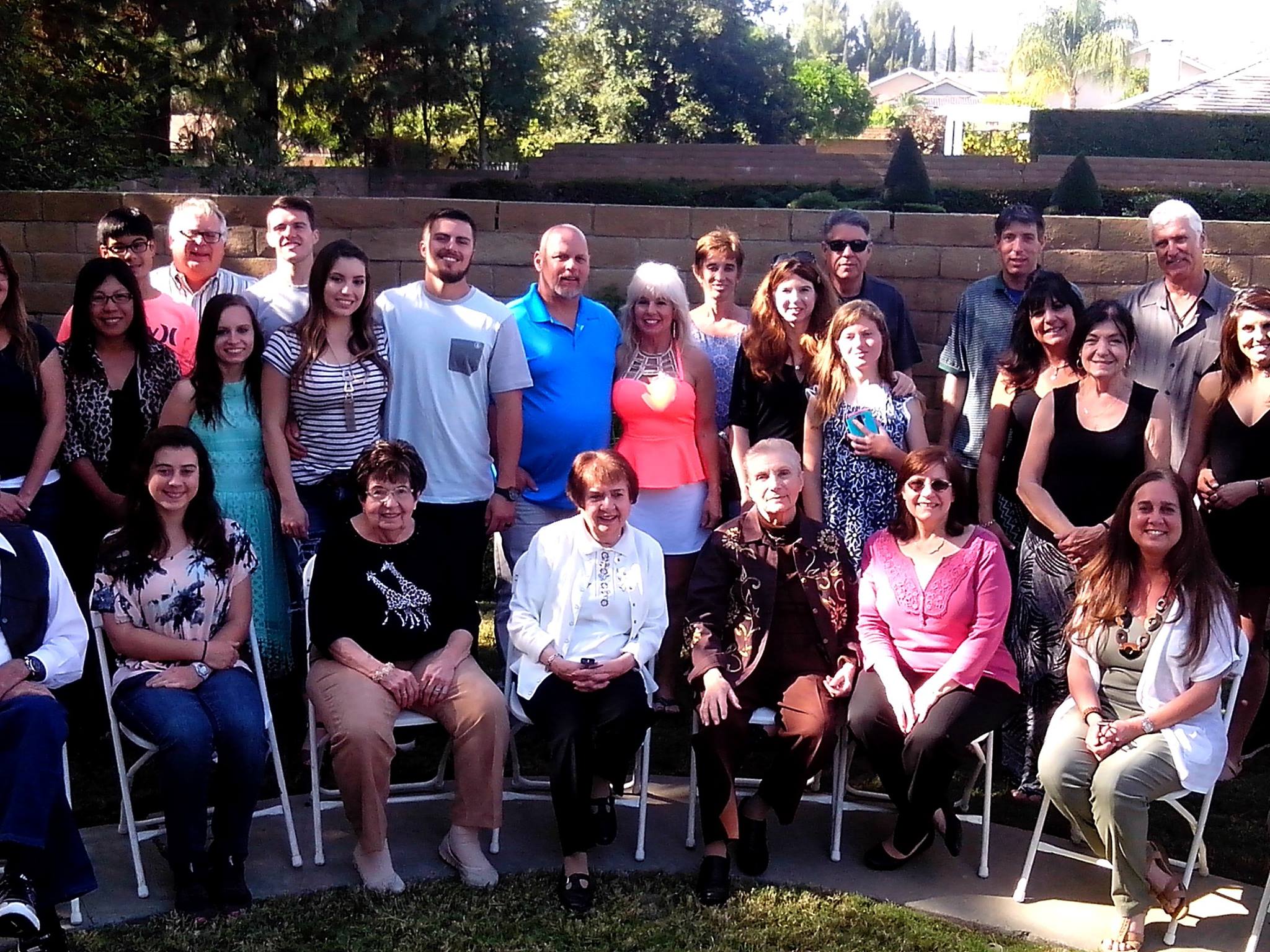